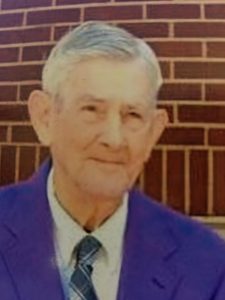 Eugene “Gene” C. Stoddard Sr., 91, of Fountain Inn, went to be with the Lord on Monday, January 21, 2019. Born in the Owings Community, he was a son of the late Lander Boyd Stoddard, Sr. and Selina Parker Roberts Stoddard, and—for over 63 years—the loving husband of the late Joyce A. Stoddard.

With a caring heart, quick wit and playful sense of humor, Gene will be remembered, above all, for the lasting imprints he has left within his family, his community, and the state of South Carolina.

Gene’s family would like to extend special thanks to Phillip Masters and to his caregiver, Jessica, with Home Instead for their loving care.

A dairy farmer and businessman, Gene was a veteran of the U.S. Navy who served in both the European and Pacific Theatres during WWII. He was a devoted member and Elder of New Harmony Presbyterian Church who, in addition to spending time with his family, often said that he found his greatest joy when he was helping others.

During his twenty-seven year tenure representing Laurens County in the South Carolina House of Representatives (from 1971 to 1998), Gene served, among other things, as: Chairman, Education and Public Works Committee; Secretary, Agriculture Study Committee; and Chairman, Joint Legislative Committee to Screen Trustees of Colleges and Universities. In addition, he was on the South Carolina School Administration Association; Board of Visitors for Clemson University; Educational Television Committee; Tuition Grants Commission; SC Highway Commission; Aeronautics Commission; and Board of Trustees for the University of South Carolina and Winthrop University. He was a Mason; Shriner; member of the Chamber of Commerce; and Magistrate. Gene also served on the SC Department of Transportation Commission from 2000 – 2004.

For his exemplary leadership, dedication and commitment, Gene was recognized by numerous awards, including the Distinguished Service Award given by SC School Board Association. In 1998, he received the Order of the Palmetto, the highest civilian honor awarded by the Governor of South Carolina for contributions of statewide significance. And, in 2009, he was especially grateful to be selected for the highest honor a Laurens resident may receive, the Henry Laurens Award.

Gene leaves a legacy of service to his community and country as well as a steadfast devotion to his beloved family. Visitation will be held at Fletchers Funeral Service in Fountain Inn Thursday, January 24, from 5-7pm. Service will be held Friday, January 25, 2019, at New Harmony Presbyterian Church at 10 am. Burial will be held at the church cemetery. The family will be at 306 Joyce Lane, Fountain Inn, SC 29644.

In lieu of flowers donations may be made to New Harmony Presbyterian Church or to the American Heart Association.