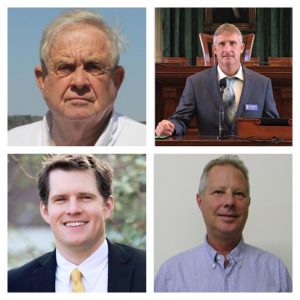 By the time candidate registration closed Saturday for the South Carolina House of Representatives District 14, the Republican field and grown to four.

If necessary, a primary run-off will be held on March 5. The primary winner must have more than 50 percent of the vote to advance to the April 23 special election to replace the retired Mike Pitts. Pitts resigned citing health concerns following an October heart attack that occurred just prior to November’s general election in which Pitts ran unopposed and was elected to a ninth term.

Blair, a Monsanto retiree who has lived on Lake Greenwood for 45 years and is a founder of Preserving Lake Greenwood, is delving into politics for the first time, but said he is a third-generation Republican whose father and grandfather both ran for office.

Blair said he sees Lake Greenwood as a tremendous asset for both Laurens and Greenwood counties that also shares common problems.

“When the textile industry left, there was a paradigm shift,” he said. “The question is, how are we going to grow now? We have to look at other industries and businesses like BMW, Fuji and Michelin that have been successful here. . . . That’s going to be the future.”

Horne, 52, began his campaign the day after Pitts announced his retirement in December.

“I have started three businesses from scratch,” Horne said. “Those businesses now employ 43 South Carolinians. . . . I believe in God, personal responsibility, the sanctity of human life, limited government, the free market and the right to keep and bear arms, and I want to be your partner. Should I be blessed to win this election, the District 14 seat will not be mine. No, the seat belongs to the people to the people of the district. I will simply be the one who takes their wishes to the statehouse.”

Like Horne, Jones declared his intentions to run soon after Pitts’ announced he was leaving office.

“A lot of the things on the local level with county council apply to the state, so I feel like I’m uniquely qualified for the state position to represent District 14 because of the transparency, accountability and all those things I’ve fought for on county council,” Jones said after being sworn in Jan. 3 for a second term on county council.

Seymour, who owns and operates Print-A-Matic in Laurens, challenged Pitts for the GOP nomination for the District 14 seat in 2002. Seymour said he is focused on the needs of the district, particularly in terms of economic development and education.

“I want to look out for the citizens of District 14 first and foremost,” Seymour said. “This will include economic development, agriculture issues, healthcare for the elderly in rural communities and increasing teacher pay with the goal of recruiting and retaining excellence as well as meeting the needs of our law enforcement and first responders.”