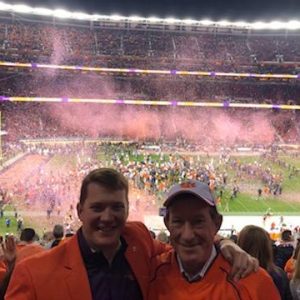 Jonathan Coleman’s trip to the National Championship began not unlike Clemson’s itself:

Like Clemson, he had a good idea of where he was headed, he just needed the ticket to get there. The Tigers got theirs with an undefeated Atlantic Coast Conference championship season and a lopsided playoff semifinal win over Notre Dame.

Coleman picked his up at Atlanta’s Hartsfield Airport on the way to Santa Clara, California and got a deal in more ways than one.

With ticket prices plummeting for the fourth installment of what has become the Clemson-Alabama championship series in college football, Coleman said he got a good deal on tickets at the airport.

Then, he got the deal of a lifetime as a Clemson fan and alum – a 44-16 routing of powerhouse Alabama at Levi’s Stadium.

“It was awesome,” said Coleman, a 2006 Clemson graduate. “It wasn’t the easiest place to get to, but it was well worth the trip. It was worth every penny and every two-hour layover in all the airports we were in.”

Coleman was among a half-dozen in his party of orange-clad Clemson supporters and part of a throng of Tiger faithful who made the trek to the West Coast to see a familiar foe in Alabama. The two teams have met in the last four NCAA Division I playoffs, each winning two National Championships.

Phillip Martin and wife Robin returned to Laurens from the Cotton Bowl in Dallas where they watched Clemson top Notre Dame just in time to re-pack their bags and head to Santa Clara to complete their “bucket list” item. 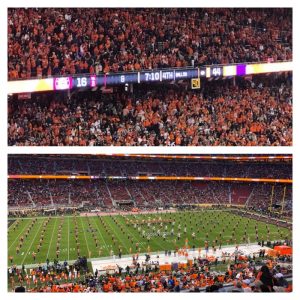 “It was humbling,” said Phillip Martin, owner of Martin Brothers Construction, I didn’t get to see the (Clemson national title win) in 1981. We went in 2016 when they just lost to ’Bama. We didn’t get to go (in 2017) when they won.

“I’ve watched it on TV, and it was great. But feeling the emotions and seeing the players’ emotions was surreal.”

Martin watched the game unfold from Section 405. Coleman admittedly lucked into club-level seats around the 35-yard-line.

“When you win, there’s not a bad seat in the house,” Martin said.

Though quite a crowd from Laurens County and the Upstate made the trip with the Tigers, most fans, including Laurens resident Jordan Peeler, caught the game on television.

Peeler, who graduated Clemson in 2002 and is part of a family with a long tradition at the school, was 1-year old when the Tigers won their first of three national titles with an Orange Bowl victory over Nebraska. He missed that game, but did experience the 2017 victory over Alabama. He stayed home for this rematch.

“That was such a different game – it was back and forth the entire game,” Peeler said. “This was exciting, too, but in a different way. It was much less stressful. We just kind of sat back and were in awe. … It was a good day to be a Clemson Tiger.”

Alabama fan Heather Renea Robinson of Fountain Inn was also impressed, posting her reaction to the championship game on Facebook.

“I’m an Alabama fan – have been since I lived there – and they are a great team,” she wrote. “Clemson played a good game against another great team. They deserved it, so congrats Tigers.”

Coleman said the stress level in the stadium began to go down around halftime for Clemson fans as the Tigers led 31-16.

“About halftime you could tell that Clemson had full control,” he said. “It was pretty rowdy. We were surrounded by Clemson people so we were feeling pretty good – the other sideline, not so good.”

Even so, it was the dynastic Crimson Tide on the other sideline.

“Bama is Bama,” Martin said. “Bama is capable of coming back, but early on in the third quarter, you could tell their players were dropping their heads. I didn’t think Clemson would win as it did. (Alabama) is the bar for all of college football. Who would think anybody would beat them in that manner?”

Clemson’s defense shut out the Crimson Tide in the second half.

The convincing victory over Alabama, which followed a similarly lopsided win over Notre Dame, may change the conversation in college football, Peeler said.

“It seemed like a lot of the reaction from Alabama’s players and the coaches was that they made all these mistakes,” he said. “I think it’s about time that people come to the realization that we’re just that good.”

Peeler said he probably will be in Clemson Saturday for the champions’ parade.

“I’ll go over there and revel in it a little more,” he said.

After two weekends criss-crossing the country, Martin said he may sit out the parade, but if the Tigers make it back to the playoffs next season, he will have his bags packed.