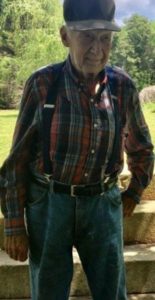 He was born at Lanford Station and was a son of the late Boyd and Edna Brooker DeShields.

Mr. DeShields was a US Army Veteran, a farmer, and a Greenville News carrier for 25 years. He attended Patterson Chapel United Methodist Church.

In addition to his wife and parents, Mr. DeShields was predeceased by his daughter, Melissa DeShields Herman.

A graveside service will be held on Sunday, December 30, at 2 p.m., at Patterson Chapel United Methodist Church.