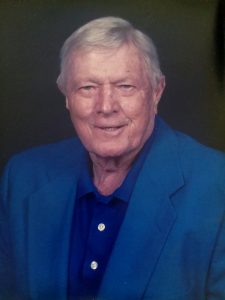 A World War II Veteran, he served as a signal man in the U. S. Navy. Mike was co-founder of the Open Door in Clinton, as well as All Saints Episcopal Church. He was Scout Master of Troup 111 in Clinton for 25 years.

A graduate of Presbyterian College, he played guard for the Blue Hose and was a member of the Walter Johnson Club for the remainder of his life. In 1985, he was recognized by the Scotsman Club for his 37 years of service as Alumnus, Benefactor, and friend of PC for his dedicated work as President of the Club, which raised over two-thirds of a million dollars in support of Blue Hose Athletics. The R. M. Turner Scholarship Fund to PC was initiated in 2007 and will be held in perpetuity by the College.

Mike was a textile manufacturers’ representative for 46 years and the owner of The Mike Turner Company.

A memorial service will be held at All Saints Episcopal Church in Clinton on Saturday, January 5, 2019, at 2 p.m., and the family will receive friends following the service in the Parish House.