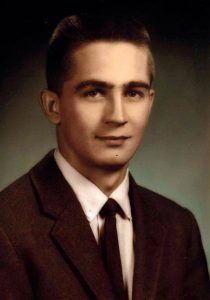 On the morning of December 13, 2018, William Hart Adams,  affectionately called “Willie Hart” or “Bill,” died in Laurens, S.C.  It was here that he was born in 1936 in a little house on College Street to a loving family, and it was here in Laurens that he built his life and raised his children.

Raised in the First Baptist Church, he spent a lot of time in the church serving in various capacities anytime the doors were open.  He was baptized there, and led youth in many ways, such as being a leader in the Royal Ambassadors, as he became a young adult.

In 1954 he graduated from Laurens High School and began the journey of working his way through college. In 1959 he graduated with a degree in business from the University of South Carolina. He was a devoted fan of the Laurens Tigers/Raiders and the South Carolina Gamecocks during the good and the not-so-good seasons, and he turned the volume up on the radio or television anytime “2001 Space Odyssey” was played before a game.

Smitten by a young Presbyterian, his marriage led him to worship on both sides of Sitgreaves Street.  The First Presbyterian Church welcomed him, and his faith walk there showed that Baptists make great Presbyterians. For 57 years he was an active member at First Presbyterian Church. He was a deacon, an elder, a Sunday school teacher, an usher, a treasurer, and a commissioner to the general assembly from his presbytery. He had a beautiful voice and sang loudly with a joyful heart when the hymns played on Sundays.

Many summers he spent time at Lake Greenwood, teaching children and adults how to water ski. He loved to be out on the water and he loved a good nap in the hammock at the lake. He often signed up for history courses and history trips. He found the heritage of our country and specifically the Southeastern United States to be of great fascination.

For many years he was a member of the Laurens District 55 school board, serving as chairman several times. During the months of the school year, he could often be found asking teachers what they truly needed to have success in the classroom. He was an avid supporter of education and saw the teachers as the first line of defense for protecting and teaching our children. His interest in educating children led him to be a part of the fruition of the Joe Adair Science Center. Advocating for our children’s educational opportunities was one of his greatest privileges.

After working at Milliken for 4 years after college, he found a job as a cost accountant at Monsanto Company, which later became Solutia. He retired after more than 30 years of service.

In his later years, he loved the game of golf and the friendships that went with it even more. When he wasn’t playing, often he could be found enjoying the game on television. In his retirement, he enjoyed several overseas trips with his wife, Patsy, the love of his life. His volunteer service continued at church and also with the Laurens Hospital Auxiliary until his last days.

Certainly his life was with his family. He was his father’s son. He revered his parents. He believed in families. He believed in loving one another. He was proud of his parents and proud of his siblings. He was a good and solid father to his three children, a provider, present every night at the dinner table and always a moral compass. He adored his grandchildren. He cherished his nieces, nephews, aunts, uncles, and cousins. He relished in family gatherings and loved a celebration that brought everyone together. He had a family in his friends, also, some of whom he was fortunate enough to have since childhood. These people were his greatest joys.

He was predeceased by his parents Johnny and Winnie Adams, and his brother, Wates Adams. He is survived by his wife Patsy; his children – John Adams (Beth), Anne Patterson (Van), and  Mary Pat Marshall (Andy); his grandchildren – Hunter Holtzclaw and Will Adams, Lauren Elise and Jack Patterson, and John, Alice and Ruth Marshall; and his siblings – John Quincy Adams of Hollister, CA, and Herbert Adams (Gwen), and Alice Brown (Byron), of Laurens.

His memorial service was a celebration to the resurrection on December 15th at First Presbyterian Church in Laurens, SC.

Memorial gifts may be made to First Presbyterian Church at 400 West Main Street, Laurens, SC 29360.