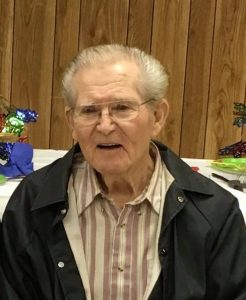 Charles Haskell “Hack” Thompson, age 88, of Hickory Tavern, and husband of 70 years of Doris Turner Thompson, passed away on Tuesday, November 27, 2018, at his home.

Born in Greenville County, S.C., he was a son of the late William Haskell and Estelle Stone Thompson. Hack was formerly employed in textiles for 40 years and retired from Perry Correctional Institution.

Hack was predeceased by a granddaughter, Stephanie Southerland; and a brother, Erskine Thompson.

Graveside services will be held at 10:00 a.m. on Thursday, November 29, 2018, at Union Baptist Church Cemetery conducted by Dr. Marcus Bishop.

The family will be at the home of his granddaughter, Heather Berryhill.

Visitation will be held at the cemetery immediately following the graveside service.