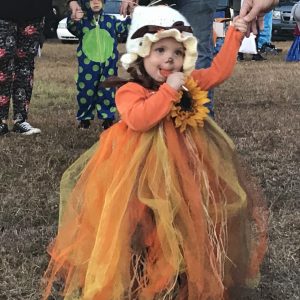 The ghosts and ghouls were out in full force on Halloween with the City of Laurens’ annual Boo in the Park event coupled with the Walking Dead Woods haunted trail presented by the Laurens Police Department at Ceramtec Park.

Meanwhile, the Laurens County Sheriff’s Office hosted a Trunk or Treat at its headquarters on West Main Street in Laurens.

This was the first year Boo in the Park was held in Ceramtec Park, moving from its usual home at the downtown City Park.

Pridgen estimated about 1,500 children and adults came through Boo in the Park, but the event’s future at Ceramtec Park is still to be determined, he said.

“We’ll talk to our sponsors and our vendors and see what’s best for the event,” Pridgen said. “We’ll see what everyone things because this is a community event and we want everyone to be happy.”

Having Boo in the Park in conjunction with the final night of the Walking Dead Woods, a haunted trail fundraiser put together by the LPD for its Christmas in the City program.

Despite being closed for several nights during October due to weather concerns, LPD Chief Chrissie Cofield said the Walking Dead Woods raised more than $3,500 in four nights. Money from the haunted trail will go to help disadvantaged youth during the Christmas holidays.

“We couldn’t have done it without all the men, women and children who volunteered,” Cofield said. “And we had help from several sponsors. None of it would have been possible without them.”

Organizers had at one time planned to keep the haunted trail open through this weekend, but decided to close it down on Halloween night.

“We won’t carry it out through the weekend, but we will definitely see everyone next year,” Cofield said.

Trunk or Treat at the LCSO turned out to be busy as well. The event closed about 30 minutes early after the treats unexpectedly ran out.

Clinton held its annual “Fall-O-Ween,” which was well attended this past Saturday. “Fall-O-Ween” was organized and presented by Main Street Clinton.