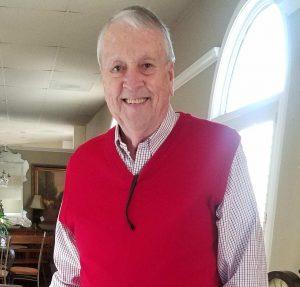 John Willard Dickens Sr. passed away unexpectedly at home on Monday, October 29, 2018. Husband of Linda Cheek Dickens, he was just 73 years old. Anyone who knew John will tell you that he packed a lifetime of meaning into his brief time on earth. He was a successful businessman who gave back to his church and community. But above all, he was a devoted husband, father, grandfather, brother and uncle – a good man who always put family first. To know John was to respect him, and love him.

Born in Morganton, N.C., he was a son of the late Alvin Johnston Dickens Sr. and Hattie Mullis Dickens. A graduate of Appalachian State University, John spent 35 years in the banking industry. He served an honorary term as chairman of the South Carolina Bankers Association.  He finished his banking career as CEO of M.S. Bailey & Sons, Bankers, faithfully serving Laurens County.  John co-founded the Dickens Company and founded Carolina Consignment in 2009. He was a member of First Baptist Church of Laurens.

In addition to his wife, survivors include two sons – John Willard “Jake” Dickens II and wife Caroline of Greenville, and William Tyler “Will” Dickens of Simpsonville; three siblings – Martha Harvey of Granite Falls, N.C., Alvin Johnston Dickens Jr. of Charlotte, N.C., and Henry Van Dickens of Morganton, N.C.; four grandchildren – Lillian Hayes Hagler, William McDowell Hagler, William Tyler “Witt” Dickens II and Michael “Hayes” Dickens. In addition, numerous nieces, nephews and in-laws will join in remembering John for his kindness, and for his presence, whether it was a holiday dinner, a trip to the beach or mountains or 18 holes of golf and fellowship.

A service to celebrate his life will be at 11:00 a.m. Thursday, November 1, at First Baptist Church 300 W. Main St., Laurens, conducted by Rev. Rickey Letson. The family will greet friends at the church after the service. Following visitation, they welcome friends to visit them at the home, 116 Todd Ave.