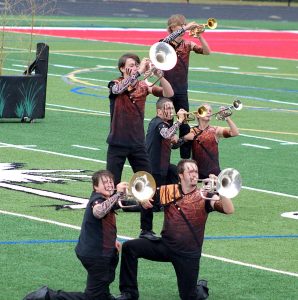 On Saturday evening, the LDHS Raider Band will perform its fall production, “Ritual,”  in the state 4A competition in Columbia, and all Raider fans are encouraged to attend.
During this competition season, the Raider Band has continued to do consistently well with the performances, dramatically and musically, said director Andy Entrekin.
“It includes elaborate costuming and set designs and is nothing like what we have done before,” Entrekin said.
Each year the Raider Band staff commissions original music and show which are both theatrical and musically challenging for the two month competition season.
“‘Ritual’ is an original composition by famed South Carolina composers Joshua V. Hinkel and Aaron Railey,” Entrekin said. “The story line takes place in a fictional Meso-American village. As outsiders, the audience is able to witness the ritual of life and fire, and there is even a ‘pseudo’ sacrifice at the very end.” 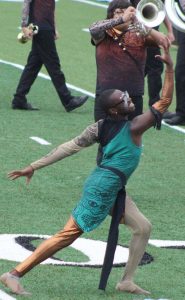 The band’s second-place finish in this past Saturday’s South Carolina Band Directors Association’s 4A Upper State Championship assured its place, for the sixth consecutive year, in the 4A State Marching Band Championship. The Raider Band takes the field at Spring Valley High School’s Harry Parone Stadium at 8:45 p.m. Saturday in Columbia.
Its late performance time is due to its high seed in the state championship contest. Seeding was earned through a blend of top scores in the areas of music performance and visual performance, specifically in this past weekend’s 4A Upper State competition.
The Raider Band’s performances have been consistent, Entrekin said. It’s been earning caption awards, first place finishes and came close to taking grand championships in two different contests on the same day.
Earlier in the season, the Raiders introduced themselves to the nation by qualifying for finals in a Bands of America Regional Championship in Jacksonville, Alabama.