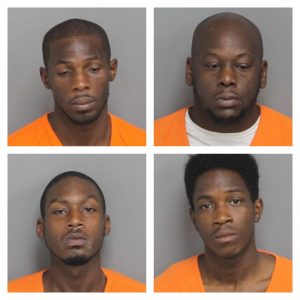 Four arrests were made by the Laurens Police Department early Monday after an investigation yielded a cache of drugs and stolen property on North Harper Street in Laurens.

James Chorly, Jr., 29, of Gaston, Neo Desmond Haywood, 32, of Swansea, Paris D’Shawn Sutton, 20, of Gaston, and Dakarie Quinzell Jefferson, 24, of St. Matthews were all arrested by the LPD. The four were also wanted by the Fountain Inn Police Department, and Jefferson faces charges from the Laurens County Sheriff’s Office.

“We were assisting the LCSO with a stolen vehicle out of Fountain Inn headed into Laurens city jurisdiction,” said Cofield said. “We were there to back up and then were able to apprehend the suspects.”

LPS officers tracked the suspects to a convenience store at North Harper Street where they were arrested.

Chorley, Haywood and Sutton are facing grand larceny charges from Fountain Inn as well as possession of stolen property in addition to drug and firearms charges from the LPD.

The charges include possession of crack with intent to distribute. Police found six grams of crack cocaine at the Harper Street location. They also found burglary tools and facemasks and a pistol along with stolen property. They are also charged with illegal possession of a firearm by convicted felons.

Jefferson is charged with possession of a stolen Ford F-250 pickup and failure to stop for blue lights by LCSO. His bond was set at $20,000.

Fountain Inn Police are charging the four with two counts each of grand larceny and one for malicious damage. They are charged with stealing the 2006 Ford F-250, a trailer and lawn care equipment from Greenville Lawn Care Service. Also, lawn mowers valued at more than $10,000 belonging to Blade’s Outdoor Equipment.

Sutton faces another count of grand larceny from Anderson County. He is accused of stealing an automobile from Brewster’s Used Cars in Anderson in July.