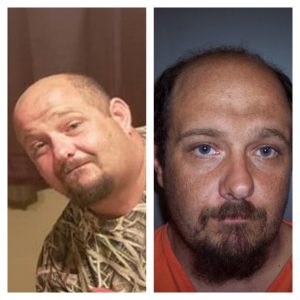 Joseph Dwain Bryan at left, and a 2013 booking photo at right.

The Laurens County Sheriff’s Office is seeking a Laurens County man wanted on charges of kidnaping, attempted murder and abuse of a vulnerable adult.

Joseph Dwain Bryan had yet to be located as of Monday after arrest warrants were obtained by the LCSO. Bryan could be in the company of three females – Mary Haggy, Kathy Sanders and Lisa Haggy. Investigators discovered and seized evidence in the case while executing a search warrant at Bryan’s residence on Friday.

A nurse at the JMS Burn Center in Augusta, Georgia, contacted the LCSO Friday regarding a vulnerable adult burn victim at the facility. The victim had severe burns to his arm and face. According to the LCSO, the nurse had concerns that the injuries were intentionally inflicted.

“Joseph Dwain Bryan is without a doubt an evil individual. The amount of torture and pain the victim endured at the hands of Joseph Bryan is unbelievable,” said Laurens County Sheriff Don Reynolds. “I want Mr. Bryan to understand, we won’t stop until he’s in jail where he belongs. I’m asking for the public’s help in locating Mr. Bryan so we can get him off the streets. If you have any information regarding his location, please contact us or report tips anonymously through Crime Stoppers.”

Anyone with information regarding Bryan and his whereabouts can call the LCSO at 864-984-4967 or CrimeStoppers at 864-68-CRIME.