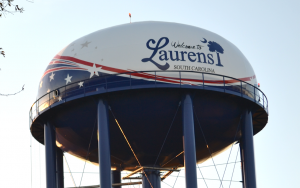 The patriotic design and painting on the Laurens Commission of Public Works’ Fleming Street water tank has been nominated for Tank of the Year, and CPW officials are hoping residents will help by voting.
“Voting began Oct. 8 and ends Oct. 19,” said GIS/Mapping Director Kevin Smiley.
Anyone can vote by going to http://tankoftheyear.tnemec.com. As of Tuesday afternoon, LCPW’s tank was among the top five vote-getters.
“This is the second time in three years we’ve been nominated,” said Smiley, who created the design for the tank. “Two years ago the tank at the Walmart Distribution Center at U.S. Highway 221 at I-385 was repainted inside and out, and tank muralist Eric Henn painted the ‘Water Bowl’ design, which ended up in the top three.”
Visible from I-385, that tank design was also created by Smiley and finished in the top three during that year’s Tank of the Year national competition.
Posted in News and tagged American flag, CPW, Laurens Commission of Public Works, Laurens County SC, Laurens SC, patriotic, public utilities, SCMA, Tank of the Year, upstate SC, utilities, Vote, water, water tank