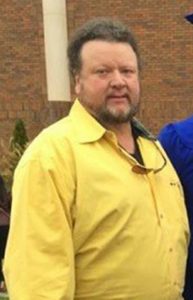 He was born in Clinton and was the son of Doris McCauley Ramage and the late Thomas Chandler Ramage, Sr. He was a graduate of Thornwell High School and Piedmont Technical College, he worked with his father, and helped him operate Ramage’s Texaco. Later he owned and operated his own business, The Glass Mechanic. He was a big Minnesota Vikings fan, and a HUGE Waylon Jennings fan. He was a loving person and especially loved his family and friends. The highlight of his life was becoming “Grandaddy” to his first grandchild. He was of the Baptist Faith.

T.R. is survived by the love of his life, Jean E. Ramage; his two sons, Chandler Ramage (Camille Watts) and Elliott Ramage (Sarah Ebel), his grandson, Waylon Thomas Ramage, all of Clinton; his cousin Mark McCauley; and his best friend, Eddy Hughes.

A Graveside Memorial Service will be held Friday, October 5, 2018 at 2 p.m. at Rosemont Cemetery. The family will receive friends immediately following the service.