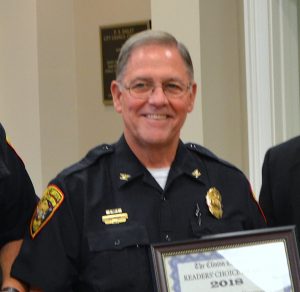 Morse had no comment on his future with the department, but a source close to the matter said Morse’s last day on the job might be Friday.
Cannon, who arrived in Clinton in January, 2018, has spearheaded a move since mid-August to dissolve the Department of Public Safety into separate fire and police agencies. He  said Thursday afternoon that Morse was still employed as head of Public Safety, but did not indicate exactly how long that would last.
“Robin is heading (law enforcement) up at this minute,” Cannon said.
When asked what that meant for the next minute, Cannon responded, “I have already discussed (Morse’s) leaving with him, and I have looked at two (potential replacements).”
The move to replace Morse comes even though Cannon announced during an Aug. 9  city council meeting that jobs within the department would be safe during the dissolution of the department of public safety. Cannon said the process to build two separate departments would take place through the winter and into early 2019.
Morse took over the Clinton Department of Public Safety when it was formed as a cost-saving measure in 2013. Under the public safety umbrella, officers could cross train as fire fighters and police, performing double duties when necessary.
Prior to his arrival in Clinton, Morse served as chief of the Laurens Police Department and was also a captain with the Laurens County Sheriff’s Office.
Cannon had already brought in a “temporary” fire chief in August, when he hired
Phillip Russell of Union as a consultant who was asked to investigate records within the department. On Thursday, Cannon said that Russell has been hired as the fire chief but still holds “temporary” as part of his title.
Cannon also said he has planned the dissolution of the city’s department of public safety since he arrived but had never mentioned in open session city council meetings until two called sessions in August. Council approved the plan in a 5-2 vote during second reading, and Cannon then explained the departments would not be completely separated for some time.
Among Cannon’s complaints with the public safety system were the small numbers of full-time fire division staff on duty at any one time, but soon after the time of budget proposals, The Advertiser was told that Morse had requested more staff and those requests were denied during the budget process. Council member Shirley Jenkins noted that at the time Cannon discussed the low staff problem.
When council members Danny Cook and Jenkins asked Cannon what it might cost to hire the additional staff now needed for an independent fire department, Cannon told council he had not determined what it would cost or how it would be funded.
Posted in News and tagged City Council, city manager Bill Ed Cannon, Clinton S.C., Laurens County S.C., law enforcement, Robin Morse