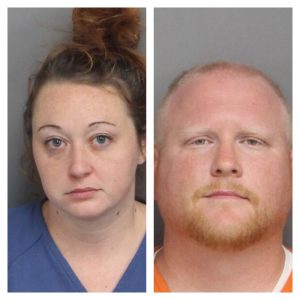 A mother’s frantic attempts to locate her missing infant and its babysitter led to the arrest Friday of a local minister and his wife by deputies from the Laurens County Sheriff’s Office.

Jennifer Bunting (English), 31, was charged with kidnapping and unlawful conduct toward a child after she was located with the child at a residence in Joanna around midnight Friday. During the course of the investigation, deputies also arrested Bunting’s husband, David English, who had allegedly assaulted his wife. A warrant was issued for his arrest, and English turned himself in to authorities Monday.

English, who is listed minister at New Hope Baptist Church in Clinton on a website used by the church, is charged with second-degree domestic violence and unlawful conduct toward a child and was booked into the Johnson Detention Center along with his wife, whose bond was set at $45,000 on three charges.

“This was a terrible incident but luckily we found the baby before this turned out to be much more tragic than it already is,” said Laurens County Sheriff Don Reynolds.

According to police reports, deputies found that Bunting had smoked marijuana around the infant while it was in her care. The infant was taken to Laurens Memorial Hospital where the child was evaluated and treated.

During the course of the investigation, deputies also discovered that English, 33, had assaulted and injured his wife during a dispute over her whereabouts earlier in the week. The LCSO report said the assault had caused “significant injuries to her body.”

According to the LCSO, investigators also found that English had been aware of his wife’s drug addiction and had taken her to “obtain illegal drugs” on previous occasions.

“This guy is a preacher as well as a teacher in another county,” Reynolds said. “It is very disturbing to think that someone in his position, which makes him a role model to our youth, would assist his wife in purchasing illegal drugs or would assault a woman.”