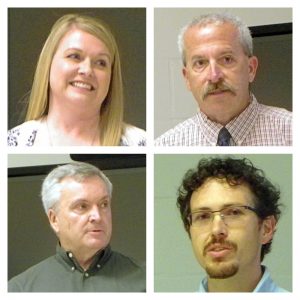 Candidates seeking seats on the Laurens County School District 55 Board of Trustees shared some common themes at a forum Thursday night at the Laurens Y.

Discipline and school safety were among the subjects addressed most often by the four candidates who participated in the forum, which was hosted by the Laurens County Tea Party and attended by about 40 people.

Two of the three candidates seeking election for Seat 2 attended the event. Cathy Little and Jim Moore participated, while Bessie Eaddy Williams did not attend. Seat 2 is currently occupied by Make Fortune, who is not seeking re-election.

Marke Earle, running for Seat 4, took part in the forum. Opponent Steve Cole did not attend. Jim Lollis currently holds Seat 4 but is not seeking re-election.

David Underwood, who is challenging incumbent Susan Calhoun-Ware for Seat 6, participated in the forum. Calhoun-Ware, the current board chair, did not take part.

Tea Party President Dianne Belsom said District 56 candidates were also invited to the forum, but declined. None of the three incumbents on the District 56 board face challenges in November’s general election.

Jim Moore, a former Laurens County Sheriff, said he is utilizing an acronym to get across the crux of his campaign, calling it SAFE. SAFE stands for “Safety, Accountability, Fiscal responsibility and Educational excellence,” he said.

“Every school has to have an emergency response plan,” said Moore, who added that duty of every district is to guarantee as much as possible the safety of its students.

Like her opponent, Little, a mother of three District 55 students, said she believes student safety and discipline go hand in hand.

She said classroom disruptions need to stop in order to help all students learn.

Earle, an educator at Hillcrest High School, said he has firsthand experience with discipline problems at school and is considered a disciplinarian by his students. He also said his insight as a teacher could help District 55.

Underwood, a software designer, said he is concerned about a decline in “morality and discipline” among students, but also identified classroom needs, saying District 55 needs improved STEM (science, technology, math) programs, which help students prepare for futures in technological fields.

“Today, technology is very important,” Underwood said. “We need to make sure that kids are on the right track to be successful.”

The general election, which includes the school board, county council and gubernatorial elections on the ballot, is set for Nov. 6.