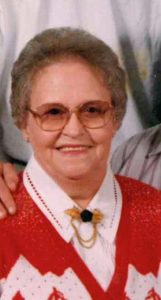 Born in Belton, S.C., she was a daughter of the late Andy Leroy Pace and Louise Harter Hutchins. Ms. Ashmore was formerly employed with a Sky City Store and Ingles. She was a member of Laurens Church of God.

Funeral services will be held at 2:00 p.m .on Monday, September 24, 2018, at Laurens Church of God conducted by Rev. Dr. Bryan Malone with burial following in Forest Lawn Cemetery.

The family will be at their respective homes and will receive friends from 1:00-2:00 p.m. on Monday at the church prior to the service.