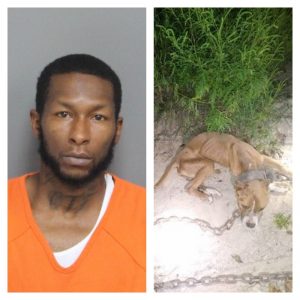 Michael Yeargin, left, is facing charges after “Courage,” right was found chained and starving in Gray Court. Yeargin is the alleged owner of the dog.

The Gray Court man accused of leaving a dog to starve on a chain in a wooded area in Gray Court was arrested Thursday on animal cruelty charges.

Michael Christopher Yeargin was booked into the Johnson Detention Center, charged with ill-treatment of animals and has since been released on bond.

Deputies from the Laurens County Sheriff’s Office were called  to a residence on Carriage Farms Court where the dog was chained. The dog was taken into custody by Laurens County Animal Control on Sept. 8 and renamed “Courage.” He was unable to stand on his own or lift his head and has been undergoing treatment at the Clinton Animal Hospital. Courage, a pit bull terrier, was emaciated and had been left without food and water.

LCSO Capt. Chris Martin found the dog’s owner was allegedly Yeargin during the investigation and a warrant was issued for Yeargin’s arrest.