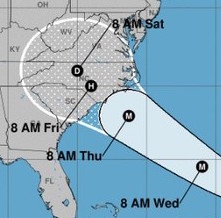 While parts of the state continue to brace for Hurricane Florence, which is due to hit the South and North Carolina coastlines late Thursday night, a group of local firefighters will be heading into the storm.

Eight members of the Laurens County Swift Water Response Team will deploy to the South Carolina Fire Academy in Columbia and then to the coast.

“They’ll probably be moved down toward Horry County or wherever they’re needed,” said Hickory Tavern Fire Chief Lance Roper, adding that the team’s deployment is expected to last until Tuesday.

As of Tuesday afternoon, Florence was expected to reach landfall as a Category 4 hurricane with maximum sustained winds near its epicenter from 130 to 156 m.p.h.

If it hits near the North Carolina-South Carolina border, as predicted by some models, or closer to Virginia, forecasters say it could be the strongest storm on record to hit that far north.

Hurricane Hazel struck the Carolina border in 1954 along that path. A tidal surge from Florence could be 15-20 feet or higher, which would be record levels.

Wherever it goes, the county’s Swift Water Response team will be in somewhat familiar territory. The team responded to Hurricane Matthew and the so-called “1,000-year flood in Columbia in 2015.

Laurens County Fire Services Director Greg Lindley said the Swift Water Response Team goes through intensive training to be ready for emergency scenarios such as the one they are about to see.

“They do several training sessions a year,” Lindley said. “They’ve been requested by Columbia on several occasions.”

The team will take two inflatable rescue boats and life rafts. Roper said he expects the team members to be asked to help rescue efforts after street flooding, which was the main task in the aftermath of Hurricane Matthew.

But that is all subject to change, depending on which path Florence takes toward shore.

“There’s four different tracking models that we looked at,” Laurens County Administrator Jon Caime said, referring to a meeting with county emergency services leaders Tuesday. “The worst model has it coming right up I-26, but that’s not the one they’re looking at as having the highest possibility.”

The model with the highest possibility is the one that has Florence hitting near the state border with North Carolina, Caime said.

South Carolina Gov. Henry McMaster’s ordered mandatory evacuations of the coastal areas of the state on Monday, but has rescinded that order for Beaufort, Jasper and Colleton counties near the Georgia border.

More than 760,000 remain instructed to leave their homes from Charleston past Myrtle Beach to the state line at North Carolina.

Laurens County will have two potential Red Cross emergency shelters available for evacuees if needed. Initially, the shelters will be at the Laurens YMCA and Clinton First Presbyterian Church Family Center.

“We have plans in place, but we’re not pulling the trigger unless we need them,” said Laurens County Emergency Services Director Joey Avery.

Those in need of shelter are asked to go to the Clinton Department of Public Safety or Laurens Police Department for direction.

“Right now, our response is going to be to help the rest of the state,” Caime said.