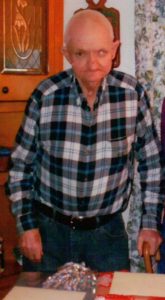 He was born in Clinton, S.C., and was a son of the late George Washington Gossett, Sr. and the late Virginia Lee Quinn Gossett. Snook was a retired carpenter, a member of P.F.B. Holiness Church and was an avid fisherman.

Mr. Gossett is survived by the love of his life and wife of 50 years, Elizabeth A. “Sugarfoot” Gossett of the home; his two sons, Greg Todd and Steve Todd of Clinton; his four daughters, Patricia Tucker of Clinton, Virginia “Ginger” Snead (Mark) of Clinton, Angela Davis (Kirk) of Clinton, and April Baird (Darien) of Clinton; and his 15 grandchildren.

In addition to his parents he is predeceased by his three brothers and two sisters. He was the last surviving member of his family.

Funeral services will be held Wednesday, Sept. 5, 2018 at 2 p.m. at the P.F.B. Holiness Church, with burial at Pinelawn Memory Gardens. The family will receive friends Tuesday, Sept. 4, 2018 from 6 to 8 p.m. at the Gray Funeral Home in Clinton.

Condolences maybe expressed to the family at www.grayfuneralhome.com