FacebookEmail
| logout
On Monday, Aug. 20, City of Clinton officials began offering proposal packets for organizations or individuals who have serious and sustainable proposed ideas for the use of Martha Dendy School. 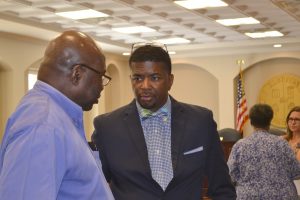 “They’ll have a month to put their proposals together, and the packets will be reviewed by a committee who will determine if the ideas are sustainable,” said Steven Evans, pastor of Friendship A.M.E. Church in Clinton. Evans was appointed by the city to develop the Request for Qualifications (RFQ) packets and oversee the proposals so that the city can better gauge needed renovations to the remaining portion of the historic school.
Evans spent 10 years working for the City of Greenville and was in a management position over a variety of programs, and he also used grant-procurement skills when he worked with a federally qualified health center.
Some of the programs Evans has worked with and visited are housed in former school facilities similar to Martha Dendy School, he said.
The school offers a location to begin developing opportunities for the community members in the former Clinton Mill area and Evans said a successful life center can begin the transformation of a neighborhood.
“I feel the city of Clinton is on the upswing and there’s potential for a lot of growth and there’s a lot of things that need to take place,” Evans said. He referred to a similar center which helped transform his home neighborhood in Greenville into a thriving community.
“That community center became the hub, and it wasn’t just for after school, but also senior programs were there and teachers 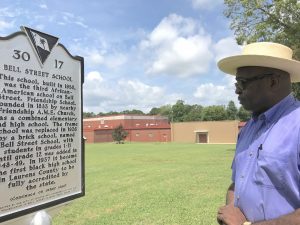 would come to meet with parents.” Evans said.
“It can make a difference.”
Evans said the project would need to include an area that showed the history of the
Martha Dendy School, which was originally the site of the first Bell Street School. Costell Little and others who attended the school were able to have it registered as a historic landmark, and a sign was put in place that gives the history of the schools where so many of the African American youth of the Clinton area were educated.
When the large portion of the school was deemed beyond repair by the city, however, a major portion was taken down, replaced by greenspace which is supposed to eventually become a park within the City of Clinton’s parks system. A basketball court was put in place but the children’s playground equipment has yet to be installed.
“There’s going to be a place for that history, Mr. Little,” Evans said. “Because that’s important.”
The city is referring to it as the Martha Dendy Project, and anyone can pick up an RFQ packet at the reception desk at the M.S. Bailey Municipal Center, Suite A, 211 North Broad Street, Clinton. For information contact Steven L. Evans at marthadendyproject@gmail.com.
Updates for the Martha Dendy Project can be found on Twitter and Facebook, and the packet can also be obtained online at www.cityofclinton.com, and search for the Martha Dendy Project page.
Posted in News and tagged City of Clinton SC, Clinton SC, community center, Martha Dendy Project, Proposals, Request for qualifications, RFQ