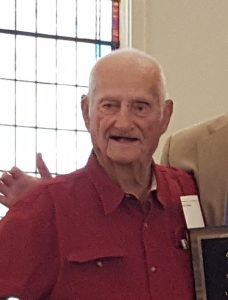 Claude Robert Shipman, 92, of 889 Fleming Mill Road and husband of the late Audrey Smith Shipman, passed away Sunday, August 26, 2018, at his home.

Born in Woodruff, S.C., he was a son of the late Boney and Minnie Grumbles Shipman. A U.S. Army Veteran of WW II, Mr. Shipman retired from J.P. Stevens after 43 years of service. He was a lifetime member of Lucas Avenue Baptist Church where he served as a deacon and Sunday School Treasurer and Superintendent for many years. He was also a member of Rossie Walker Masonic Lodge #354.

The family will be at their respective homes and will also receive friends at the church one hour prior to the service.