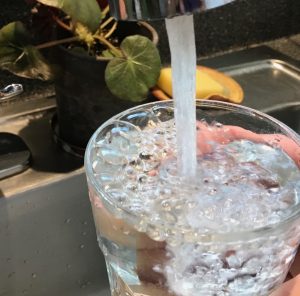 Laurens, South Carolina  – According to a press release by the Laurens Commission of Public Works, some Laurens area residents have been experiencing discolored tap water over the last few days. CPW general manager John Young told commissioners Monday night that this is caused by higher than normal levels of manganese. Manganese is a common, naturally occurring mineral in the environment and does not pose any health risks.

Young said that CPW Water and Sewer Superintendent Will Patterson had spent much of the day at the treatment plant to try some other processes to restore the typical clear color, which has only been reported in a few areas of Laurens.

“We are typically able to remove most of the manganese through our treatment processes, however the large amount of rain that we’ve experienced over the last few weeks has affected the levels of manganese in our raw water source, Lake Rabon,” explained CPW Water and Sewer Superintendent Will Patterson. “Our operators started seeing slightly higher levels last week, and we have been getting a few calls a day where customers are noticing discolored water.”

The CPW is adjusting its treatment process to remove the additional manganese. In the meantime, customers should refrain from doing laundry if they notice discolored water.  Allow several cold-water faucets to run until the water is clear.