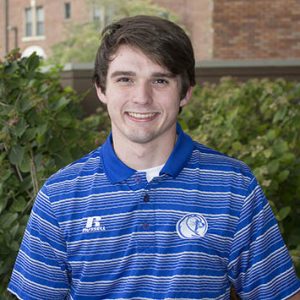 GREENWOOD ­– The parents of James Logan Lusk have established two Lander University scholarships to honor the memory of their son, who lost his life in a single-car accident in February while returning to school on U.S. Highway 25 in Laurens County.

Beginning with the 2018 academic year, the Logan Lusk Angel Memorial Science Scholarship and Logan Lusk Angel Memorial General Funded Scholarship will be awarded to a science major student and a general major student who is in need of financial assistance and can demonstrate the same passion and commitment to leadership exhibited by Lusk in the areas of academics, community service and extracurricular activities.

On Sept. 21, a golf tournament benefitting both Lusk scholarships will be held at The Rock Golf Club & Resort (formerly known as The Rock at Jocassee) in Pickens.

As a sophomore chemistry major at Lander, the Pickens native excelled in the classroom, and served as an orientation leader and student assistant in the university’s Office of Enrollment Management. An avid outdoorsman, Logan was a pre-med student planning to become an orthopedic surgeon.

Established by his parents, Angela and Jimmy Lusk, the scholarships are their effort to preserve the impact of their son’s life.

“It’s in his honor,” Angela Lusk said. “It’s a way of continuing what he wanted to do.”

Lusk’s passing devastated the close-knit Lander family. Days after his accident, a student-led memorial service was held on campus, and included personal reflections of the impact he had made in the lives of family members, friends and classmates. The service included the release of balloons inscribed with the message, “You are loved, missed and remembered.”

A Calloway Crabapple tree was later planted in front of the Physical Science Building on campus, where Lusk spent much of his time studying.