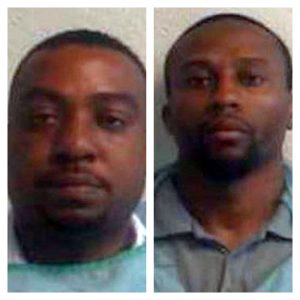 A Laurens County magistrate was arrested Tuesday in the Donalds area of Abbeville County along with another Laurens man in connection with a marijuana-growing operation.

Mareno Cyrus Foggie, 38, and Jonathan O’Neal Grant, 36, were charged with manufacturing marijuana at a property in Donalds owned by Foggie, according to the South Carolina Law Enforcement Division (SLED). The investigation was turned over to SLED by the Abbeville County Sheriff’s Office.

Foggie is a Laurens County magistrate and former deputy with the Laurens County Sheriff’s Office. Foggie and Grant were both booked into the Abbeville County Detention Center.

Since the arrests, the Supreme Court of South Carolina’s Office of Disciplinary Counsel has placed Foggie on interim suspension, said Laurens County Administrator Jon Caime. Foggie will not be paid during his suspension.

“I am both saddened and disgusted for being charged with a crime I did not commit,” the statement read. “I am completely innocent of these charges and it is very unfortunate for me and my loved ones that law enforcement got this one wrong. I have cooperated with the authorities throughout this entire process and I am completely confident that when all the facts are revealed my innocence will be proven without a shadow of doubt.”

According to arrest warrants released by SLED, the building on Setters Lane in Donalds contained more than 10 and less than 100 marijuana plants.

Grant was seen by several witnesses carrying containers believed to be filled with water into the building. He also borrowed Foggie’s pickup truck to visit the property. Witnesses also said they saw Foggie visit the property as late as June 15-17, according to SLED.

Laurens County Sheriff Don Reynolds said he was disturbed by the arrest of a member of the local judiciary.

“We all conduct ourselves with a code of ethics, and it is very disturbing to see one of our appointed magistrates charged with such a crime,” he said in a statement. “Mr. Foggie was a newly appointed magistrate, and hopefully the effects of this on any criminal and or civil litigation will be minimal.”

The cases against Foggie and Grant will be prosecuted by the 8th Circuit Solicitor’s Office.