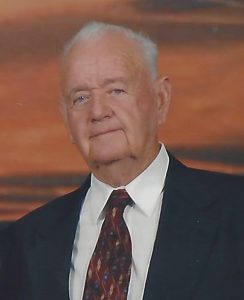 Talmadge Melmoth Patterson, 89, loving husband of Vivian Campbell Patterson of Enoree, S.C., passed away on Sunday, July 15, 2018 at his home.

Mell was born on November 23, 1928 in the Lanford Community, S.C., to John Talmage and Lola Irene Patterson. He graduated from Laurens High School in 1945. Mell and Vivian married on July 10, 1949 and celebrated their 69th wedding anniversary this past week. While a Sargent in the US Army during the Korean Conflict, he was an instructor for the Fort Jackson Mechanical School. He farmed with his father and brother until 1956 when they founded Patterson Vermiculite Company which they operated for 40 years. Mell was a long-time attendee of Patterson Chapel United Methodist Church where he held numerous positions within the church.

Funeral services will be held on Wednesday, July 18, 2018, at 3 p.m. at Patterson Chapel United Methodist Church in Lanford, S.C., with burial to follow in the church cemetery. The family will receive friends at the church prior to the service from 2 p.m. to 3 p.m.