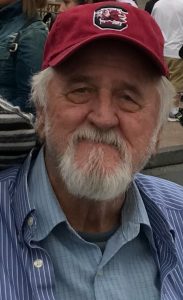 James Burgess, much loved spouse, father, and grandfather, passed away on Thursday, July 12, 2018.

He is survived by his wife of 25 years, Sally Burgess, his children: Joanna Burgess, Karen Nolen (Larry), Kim Nelson (Jeff), and Keith Burgess (Anne), his five grandchildren: Lawson Nolen, Jessica and Abbie Suggs, Emily and Noah Burgess, and his siblings: Judith Graham and Henry Burgess. He will be missed, especially by his pets: Muffin, Jack, and Honey.

As per Jim’s wishes, there will be no funeral. In lieu of flowers, please send donations to your local ASPCA or St. Jude’s Children’s Hospital.