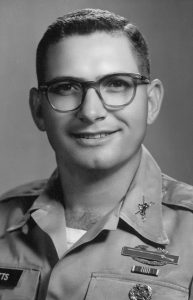 Born in Mountville, S.C., he was the son of the late James Hudgens and Gladys Armstrong Watts. Mr. Watts was a Distinguished Military Graduate of Presbyterian College and earned a Masters Degree from Northwestern State University. He was retired from the United States Army. He was a member of First Baptist Church in McCormick and was a former member of Rolesville Baptist Church in Rolesville, NC. Mr. Watts was a former resident of Wake Forest, NC prior to moving to McCormick, SC.

Funeral services will be held at 2 p.m. Tuesday, July 10, Sullivan-King Mortuary Chapel, with military honors provided by the Campbell Patriots Honor Guard, will be at M.J. “Dolly” Cooper Veterans Cemetery. The family will receive friends from 12:30 until 1:45 p.m. Tuesday at the mortuary, 3205 North Highway 81, Anderson, S.C.