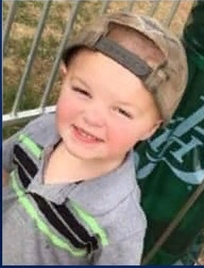 When Chas Hayes prayed Sunday, sometimes pausing slightly in mid-sentence in search of words as the air hung heavy and humid with hints of rain, he prayed for justice.

The child’s mother, Jessica Blake Smith, and her boyfriend, William Ryan Looper, have been charged in the child’s death. Looper is charged with murder and first-degree sexual conduct with a minor. Jessica Smith is charged with homicide by child abuse. Both adults also face multiple counts of unlawful neglect of children.

“From experience in law enforcement, lots of times all we are faced with is the bad and the evil in our communities,’ said Hayes, a former Anderson County Sheriff’s deputy. “This was important in light of this evil to get together and show that there is still good.”

The vigil was organized by community activist Jack Logan of Put Down the Guns Young People, and the Laurens County Sheriff’s Office. Toys were donated for two older boys, ages 6 and 7, who were at the home of the suspects. 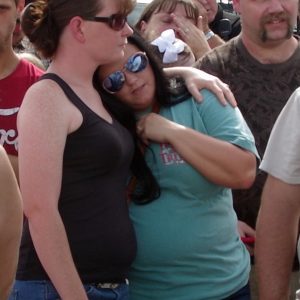 Katie Carroll, a teacher at Hickory Tavern School, delivered a bag full of toys, sitting them with others at a LCSO vehicle.

“They were just precious,’ Carroll said. “They had a contagious smile and such sweet spirits.”

She said she never saw any signs that something could be wrong at home.

Simpsonville’s Torrey Philson, a friend of the victim’s biological father, drove down to deliver a plush white teddy bear at the vigil.

“I think this is a part of the healing process for the whole family,” Philson said.

Gray Court resident J.R. Lyda dropped off a toy and said he helps rear his girlfriend’s children and cannot fathom why or how something like this tragedy could happen.

He said he wanted to be at the vigil for the family and for the county.

“I was devastated. I don’t understand it,” Lyda said. “You’d think if they really didn’t want the child, they would take him to DSS. It’s really heartbreaking.”

Members of the victim’s family, including his father, and members of law enforcement attended the vigil along with members of the community from across Laurens County. 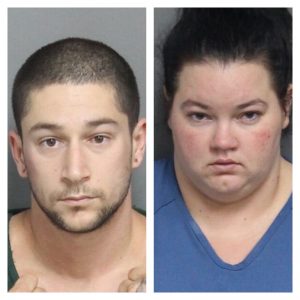 Unfortunately, I have had to work many homicide cases over the years, some of which have involved children,” said veteran LSCO Capt. Robert Wilkie. “However, this is by far the worst thing I’ve seen. This incident brought tears to the eyes of our investigators. What these individuals did to this child is unimaginable.”

Laurens County Sheriff Don Reynolds said the investigation has been difficult for all of the deputies and investigators involved in the case, even after they left the crime scene Saturday.

“I don’t know if any tragedy bigger than this,” Reynolds said. “This child – it’s really so hard for me to talk about it –because I’m thinking what could have been going through his mind, about why he was being treated like that because he suffered a terrible death. For him to have to go through that . . . it just breaks my heart.”

Reynolds said deputies working the case have the LCSO’s chaplaincy if needed, and Reynolds said he has reached out to state agencies if any of his investigators and deputies are in need of counseling services.

Twice during the vigil, several people in the crowd began to chant, “Justice for Brantley.”

Reynolds said justice is now the focus of law enforcement and the 8th Circuit Solicitor’s Office.

“I walk slow and careful because I don’t want to jeopardize this case,” Reynolds said. “But I assure you this office is going to work – it’s going to be a long process and very hard to see that justice is handed out. I know I made the comment that I wanted to see (the suspects) in jail forever. If that’s what we get, that’s what we get. But I want justice.”