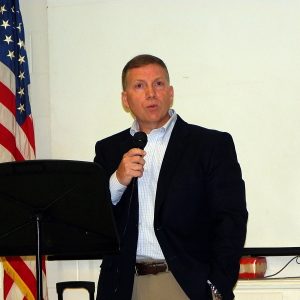 Meanwhile, in District 1, voters will return to the polls for a June 26 runoff between Kemp Younts and Susan Thackston, who were part of a four-candidate race to take over the seat being vacated by the retiring Ted Nash.

Carroll won a three-way race for the seat, defeating fellow Republicans Tollison and Dale Mitchell in Tuesday’s primary election, earning 50.47 percent of the vote. With no Democratic challenger and with more than 50 percent of the votes cast in District 5, Carroll is the presumptive winner for the seat in November’s General Election.

“It really is a relief not to have to go two more weeks and try it,” Carroll said. “I think the vote was kind of a referendum on what the voters wanted to see, so I’m real proud of that.”

Tollison, who was seeking a fourth term on council, received 284 votes, second to Carroll’s 486 votes, which were just enough to put him over the top. Dale Mitchell finished third with 193 votes. 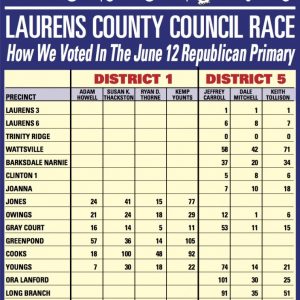 “Congratulations to Jeffrey Carroll for winning the County Council seat for District 5,” Tollison said. “We think the residents of District 5 made a good choice. We want our supporters to fully stand behind him as we move Laurens County forward. I have enjoyed serving Laurens County and the residents of District 5. I would like to thank my family and constituents for their support in these many years of service.”

The primary results are to be certified and will become official Thursday.

Tollison has come under scrutiny due to regular absences from county council meetings. A change in his job status over the past year resulted in regular trips out of town as he commuted during the week first to Kentucky and then to New Jersey. When he decided to seek another term, Tollison said he expected the travel aspect of his job to end before the end of the year.

“I think you have to run on your record, and he had a record and voters judged him on it,” said Caroll, who is the EMS Director for Spartanburg County. “It seems like it might have been (a factor) but I tried not to use that in my campaign or make it an issue for me. I tried to have a vision of what I thought would be good for someone on council, and that being me, and what happened with him was between he and the voters.”

Younts, a home remodeler, was on a family vacation when he learned of the runoff.

“I am honored and humbled to have been elected to a run-off spot for District 1 of Laurens County,” Younts said in an email. “I am sincere when I say I want good things to happen for our county.”

Thackston said she was happy to make the two-candidate run off for the seat.

“I’m pretty proud of the folks in the district here,” Thackston, a retired healthcare worker, said. “We’re in it together.”

She said she plans to continue to campaign as she has thus far.

“I think we’re going to have to do a little bit more person-to-person interaction,” she said.