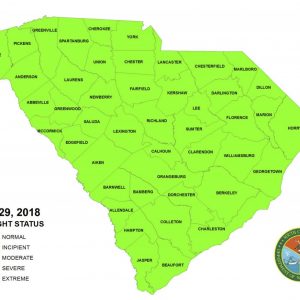 According to a release from the S.C. Department of Natural Resources, South Carolina is completely drought free for the first time in almost two years.

The S.C. Drought Response Committee met Tuesday, May 29, via conference call to update the drought statuses of all counties in South Carolina.

Above average rainfall totals across much of the state during the month of May, along with improving numbers across a range of indicators, prompted members of the Committee to vote unanimously to change the drought status of 13 counties from “incipient” to “normal.” The counties that were removed from the first level of drought (incipient stage) included Abbeville, Aiken, Allendale, Bamberg, Barnwell, Colleton, Dorchester, Edgefield, Hampton, Lexington, McCormick, Richland, and Saluda.

The weather pattern across South Carolina for the month of May began with warm and dry conditions. However, the weather pattern changed during the second half of the month, according to Leonard Vaughan, Senior Hydrologist/Meteorologist with the National Weather Service.

“A persistent trough of low pressure produced a moist, southerly flow, which increased rainfall coverage,” said Vaughn. “This, combined with the additional moisture from Sub-Tropical Storm Alberto, brought even more beneficial rainfall. Over the past fourteen days, rainfall across South Carolina, has ranged from 200 to 600 percent above normal, with totals from 3 to 12 inches.”

“Recent rainfall, along with higher humidity, has helped reduce the number of wildfires statewide,” added Brad Bramlett, Rural Fire Coordinator with the S.C Forestry Commission. “This was very much needed, since we were well above our 5- and 10-year averages for the number of fires just a month ago.”

The above normal rainfalls over the past several weeks have also significantly improved streamflow levels across the state. All of the state’s major reservoirs are now at or near their target levels for this time of year, reported South Carolina Department of Natural Resources Senior Hydrologist Scott Harder. “According to the latest available data, lake levels and stream flows across the state are in good shape now,” said Harder. “Overall groundwater levels look good as well.”

These improved conditions supported moving all counties that were previously in an incipient drought status to a no drought (normal) status. The committee will continue to monitor the weather and will meet again as conditions warrant. More information about drought conditions and drought policy in South Carolina is available via the new and improved South Carolina Drought Portal at www.scdrought.com