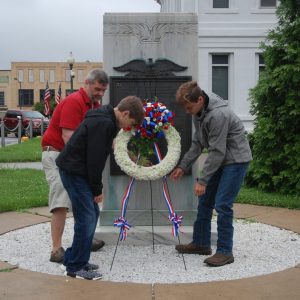 Brothers Tucker, left, and Hayden McHone place a wreath along with florist Tom Stevenson at the World War I and World War II monument on the Historic Square in Laurens during a Memorial Day observance.

A small group of locals representing the WoodmenLife (nee Woodmen of the World) Chapter 206 were undeterred by steady rain Monday morning as they laid a wreath at a memorial honoring U.S. Military who died during World War I and World War II.

While most Memorial Day activities planned in Laurens County were cancelled due to rainy weather, the group was determined to honor those lost, especially since the end of World War I came 100 years ago on Nov. 11, 1918.

“This is not a lot, but it’s one small way we can honor those who have made the ultimate sacrifice,” said Michael Martin, who spoke to the group before it arrived at the square for the ceremony. Members of the group gathered for breakfast at Bojangles before attending the ceremony.

The Martin family had a special interest in the 100th anniversary of the end of World War I. Just months before the war ended, Hickory Tavern’s Lewis Felton Abercrombie, a U.S. Marine Corps corporal, was mortally wounded after an Allied victory at Cantigny, France. Abercrombie was wounded on June 8 and died eight days later on June 16. Cantigny was the first major offensive of the war for American troops.

“He was my mother’s oldest brother,” John Martin, a WoodmenLife representative, said of the uncle he never knew except through family stories and a age-colored copy of the Charleston, S.C. Sunday News with a full photo of Abercrombie dressed in his USMC uniform. He had also served in the West Indies during his two prior years as a U.S. Marine. He was 28 when he was killed.

Michael Martin said while Memorial Day is dedicated to the memory of the fallen in the U.S. Military, they should be honored every day for their sacrifices.

“One day is not enough,” he said. “We need to remember every day.”