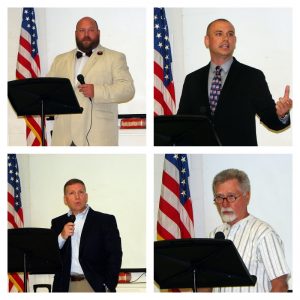 All of the candidates are seeking the Republican nomination in the June 12 primary election.

The candidates, all of whom described themselves as political conservatives, addressed several issues facing Laurens County and recent decisions by the Laurens County Council, including growth, planning and budgeting.

“My vision starts with growth and development,” said Howell, an educator and coach at Laurens District High School who lives in Fountain Inn. “That, in turn, can create vast improvements to day-to-day life in Laurens County.”

Thorne, a Fountain Inn resident and owner of Thorne Ambulance Services, addressed the county’s lack of infrastructure in some areas as stifling growth. He also said the council’s budgeting process needs to improve.

“There are a lack of efficiencies, so we can find ways to reduce costs,” Thorne said. “It’s frustrating to see (council members) in budget sessions spend money like it’s their own when it’s coming out of taxpayers’ pockets.”

Each candidate made a prepared introductory statement and then was given five minutes to answer prepared questions.

Carroll, who is the EMS director for Spartanburg County, said he brings an eye on the need for planning and an expertise in the field of public safety he believes will be valuable to county council.

“We have good people who try every day to do good work here,” Carroll said. “The opportunity to invest in public safety has always been there.”

Mitchell, a retired U.S. military veteran, said he has spent much of his time in Laurens County as a volunteer for local youth sports teams, hospice and a fire department.

He said he believes county council members are spending too much as neighboring counties such as Greenville and Spartanburg continue to grow at a faster pace than Laurens. He said accountability for council members is key.

“They waste money,” Mitchell said. “You need to be accountable to the taxpayers. When I go around talking to people, most of the people are elderly; they’re low income; they’re on social security; and they don’t need taxes being raised on them.

With no Democratic challengers, the winner of the GOP Primary on June 12 will be the presumed winner of the November general election, barring any successful write-in challenges.