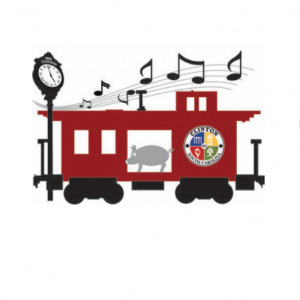 Clinton, SC – A rising star in the country music world and a fast-paced BMX bicycle stunt show, as well as an “anything goes” juried car show, are among the many new items headlining this weekend’s Rhythm on the Rails and barbecue festival in Clinton.
Main Street Clinton is sponsoring the event, which starts with two music events Friday evening.
Then Saturday brings a tribute to the Armed Forces by the Clinton High ROTC and plenty of music, including The Shag Doctorz, which takes the stage at 7:30 p.m. for the final concert of the evening.
Quilted Sky Band, a classic rock duo, will take the CNNGA stage at 6 p.m. on Friday and country music singer Julie Roberts begins her show at 7:30 p.m. on opening night.
Residents are encouraged to bring lawn chairs for the evening music events. Saturday morning offers the car show and a 10 a.m. performance by District 56 student singers and musicians also at the CNNGA stage, followed by festival variety entertainer Mark Lippard at noon.
“His performance is geared toward adults and children,” Main Street Clinton manager Adele Alducin said. “After he leaves the stage, he will continue as a roving variety show like an old-fashioned circus entertainer.”
The car show contest welcomes local car owners, and they should be in place before 10 a.m., Alducin said.
“The car show is being presented by a car group out of Greenville called Hot Rods and Happy Hour, named for their radio show which is at 5 o’clock,” said Alducin. “They bring car shows to North Carolina, Georgia and South Carolina and handle the registration and judging because it will be a trophied event.”
The group is managing the car show, Alducin said, but it’s open to anybody.
“Anyone who has an interesting car is welcome to come,” Alducin said. “It’s a $20 entry registration fee and the cars need to be there before 10 a.m., and it goes from 10 until 2 p.m.” 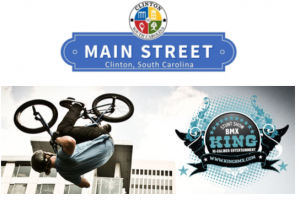 For children and enthusiasts, an exciting addition to the festival will be the King BMX Stunt Show, which will take place on Musgrove Street three different times Saturday, at 11 a.m., 2 p.m. and 5 p.m.
“There are four riders per show and each performance will last 30 to 45 minutes,” Alducin said.
The event will take up the entirety of Musgrove Street, Alducin said. It’s a good location because there are plenty of sidewalks for spectators, and it is beside the Orr Park pocket garden.
“There is a lot of bicycle history there,” Alducin said, referring to the park’s namesake, Mr. Orr, a former bicycle repair shop owner.
The afternoon offers plenty more music on the CNNGA stage, including a Newberry group of drummers, using buckets for street tribal beats.
And although the Rhythm on the Rails still holds a railroad theme, May is National Barbecue Month and ROTR has gained strength as a barbecue festival.
This year all the large vendors will also be competitive barbecue teams and awards will be announced at 3:30 p.m. Saturday.
“We had complaints that people really wanted to eat more actual competitive barbecue so this year all the large vendors are also competitive barbecue teams,” Alducin said. “Plus there are plenty of vendors selling typical festival foods, like wings, hot gourmet hamburgers, funnel cakes and your regular fair foods.”
Posted in News and tagged Armed Forces, BBQ, BMX, Clinton High School, Clinton SC, District 56, festival, Friday May 18, Julie Roberts, Main Street Clinton, music, railroad, Rhythm on the Rails, ROTC, ROTR, Saturday May 19, this weekend, upstate SC