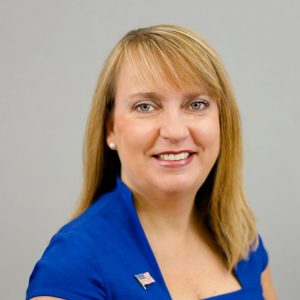 With just under a month to go before the 2018 Democratic Primary election, U.S. House of Representatives 3rd District hopeful Mary Geren made a campaign stop in Rep. Jeff Duncan’s backyard.

Geren, who is seeking the right to challenge Duncan in the November general election, spoke Monday night at a meeting of the Laurens County Democratic Party in Clinton. Anderson’s Geren and Hosea Cleveland, of Seneca, are seeking the Democratic nomination in the June 12 primary.

Geren, a long-time college educator, told the gathering of about 15 local Democrats that she wants to be part of a “blue wave” of Democrats elected to office in November.

But Geren also said she realizes she is running in a deep red state and taking on a candidate from an even deeper red county. She is focusing to a large degree on education and is hoping to win the votes of her fellow educators and newly registered students. She is also hoping to flip some more moderate Republicans who share her goals.

“Our strategy is to get our young folks out; we want to get them to register at Clemson and at their local colleges, even if they come from some other place, they can choose to register in the district,” Geren said. “They’re going to vote not as a party but for who’s speaking to them on the issues they care about.”

Mobilizing the minority vote, as happened in the special election in Alabama that turned what appeared to be a GOP given into an upset victory for Democrat Doug Jones last year, will also be a necessity if Geren is to also pull off an upset this November.

Geren said she has raised more money from individual contributions than any other Democratic candidate since the District 3 seat belonged to now Sen. Lindsey Graham.

“I feel really good about that,” said Geren, who has left her teaching position to be a full-time candidate. “We just hired a field director, and now that I’m not teaching, I can knock on more doors.”

Geren said if she defeats Cleveland in the primary, Duncan has agreed to a series of three debates leading up to the general election.

In front of a friendly audience, Geren chided Duncan, who gained a seat on the powerful Energy & Commerce Committee this past year, for supporting oil drilling in the Atlantic Ocean off the South Carolina coasts despite protests from other state leaders, including Gov. Henry McMaster.

“I believe in this – I’m not in this for accolades or money; I didn’t even know what the salary was when I started,” Geren said. “I’m doing me. I’m in this for my kids, and I’m going to preach public education until I die. I may not win, but public education saved my life, and if we don’t figure that out in South Carolina and in the nation, then we’re in trouble.”