Libby Burroughs, daughter of the slain Jim Bolt, attempted to describe her father to everyone in the courtroom Thursday, especially to the man who had just been convicted of killing him in 2003.

Arthur “A.J.” Bowers hung his head and stared downward from the moment the guilty verdict was read by 8th Circuit Judge Donald B. Hocker until he left the courtroom in handcuffs to serve 50 years in prison for Bolt’s murder. 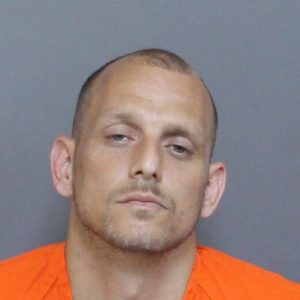 When Bowers arrived in Laurens as a “carnie” with the fair in September of 2003, Burroughs said her father, the man most everyone at the Laurens VFW called “Pop,” would have helped the then 17-year-old Bowers find a path other than the self-destructive one he was traveling – the one that led him to the VFW on Sept. 26, 2003.

“So many people from the VFW have come to me and said my dad treated them like a son,” Burroughs said, addressing the court following the verdict. “He would’ve done the same for Mr. Bowers in a different situation.”

Instead, a jury of 10 men and two women took less than three hours to convict Bowers in the nearly 15-year-old murder case at the Laurens County Judicial Complex, agreeing with a case laid out by the 8th Circuit Solicitor’s Office that Bowers and a group of co-conspirators set upon Bolt while robbing the VFW and killed him.

After nearly 15 years, the prosecution’s case relied primarily on three separate statements given to police by Bowers in the days following his arrest in 2003. The jurors also were asked to believe the testimony of a Laurens woman, Shawn Case, who said Bowers attempted to buy crack cocaine from her with bloodstained cash while wearing bloody clothing in the hours following the murder.

“It was all circumstantial,” said 8th Circuit Deputy Solicitor Warren Mowry. “But there was a lot of substance in that circumstantial evidence.”

During his opening statement to the jury, Mowry admitted to the court that the prosecution did not know who swung the weapon – thought by forensics experts to be a hammer – that killed Bolt, but in a conspiratorial murder, the “hand of one is the hand of all” under state law, meaning that any one or all of the conspirators can be charged with murder.

A witness for the prosecution and Bowers’ own statements to police placed Bowers at the murder scene. A forensic expert testified that Bolt suffered 19 blunt-force trauma wounds to the head in the grisly murder.

Assistant Solicitor Jim Todd, a Laurens native, was in high school when the murder shook the community.

“Being born and raised in Laurens, this case meant something to me,” Todd said. “I was in high school, and I remember it like it was yesterday. . . . So, I was honored to have a helping hand in the resolution of the case.”

Mowry said his team had expected that Bowers would accept a plea that would help prosecutors seek out the others involved in the crimes at the VFW, but he refused as did Brenda Roberts, who was convicted by a Laurens jury a year ago for accessory after the fact of murder. She is serving 14 years for her role in covering up for Bowers and his co-conspirators.

“Frankly, we expected (Bowers) to cooperate and give us a statement, but he didn’t,” Mowry said. “He has sowed the wind, and he has reaped the whirlwind. . . . Unless we get cooperation from Bowers, it’s going to take a major break in the case to go forward (with further prosecutions).”

Burroughs said she has followed Bowers’ life from afar over the years and was saddened that he continued to find trouble. He has three drug-distribution charges pending in Florida, which had been attempting extradition prior to this past week’s convictions on murder, criminal conspiracy and armed robbery.

“I had hopes for this young man,” she said, referring to Bowers, now 32. “He was a young man, and I had hoped he would have time to think about the consequences of what happened here and turn his life around. I’m really disappointed that he didn’t take that opportunity.

His head hung low, hands shackled, there was no defiance from Bowers as Burroughs spoke of her father, a man who “loved life and always had a whistle or a song,” and the long, 15-year journey of her family since his death.

“I’ve often wondered why this took so long,” she said. “But I see now it was this judge, this solicitor, this jury that needed to be here in this place and time.”