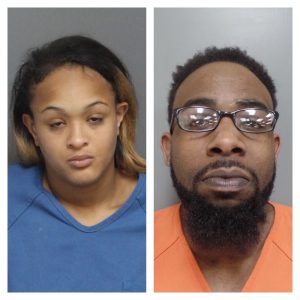 The Laurens Police Department has arrested two people suspected of injuring two 13-month-old toddlers in a case of child abuse.

Randy Burnside Jr. was arrested Tuesday morning after the Laurens Police Department asked for the public’s assistance in locating him. Burnside was charged with two counts of unlawful conduct toward a child and two counts of infliction of great bodily injury upon a child. He was also wanted for resisting arrest from an unrelated incident.

Aliyah Stewart, 17, the mother of the twin siblings, was arrested Friday and remained in the Johnson Detention Center Tuesday. She is also charged with two counts of unlawful conduct toward a child and two counts of infliction of great bodily injury upon a child.

The child-abuse case was brought to the LPD by officials at Laurens County Memorial Hospital Friday after the two toddlers arrived at the hospital. According to the LPD, they both had sustained severe contusions, abrasions and hematomas, and one of them had suffered a skull fracture.

This case is still under investigation and more charges could be forthcoming, according to the Laurens Police Major Chrissie Cofield.