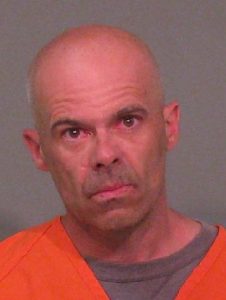 A man suspected of a pair of car thefts in Laurens County was arrested after a car chase Friday that covered five counties and ended with a crash in York County.

According to multiple media reports, Sanders told deputies he stole the car because “the Mexican drug cartel are trying to kill him.”

Sanders was remanded to the York County Detention Center and was charged with reckless driving, failure to stop for a blue light and receiving stolen goods (value of $10,000 or more). He is also being held at the request of five other law-enforcement agencies, including the Laurens County Sheriff’s Office, said LCSO Capt. Robert Wilkie.

The LCSO released a still photo from a security camera of a shirtless man suspected of stealing a Kia Sorento from a Clinton residence on Musgrove Street on Thursday as well as a car from Spartanburg County. He led local law enforcement on a 25-minute chase along Highway 56. The Kia Sorento was located Friday morning in Honea Path, but a 2000 Chrysler Town & Country van was stolen a short time later from a Honea Path residence in Laurens County.

LCSO Capt. Robert Wilkie said he expects Sanders to be returned to Laurens County at some point to face charges. Sanders could also face charges in Spartanburg, Union, Anderson, Greenville and Chester counties in addition to York County.