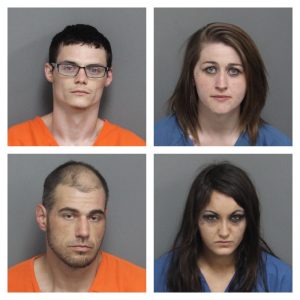 The arrest of Michael Alan Ford, 22, of Fountain Inn for possession of a stolen Ford F-150 pickup led to the arrests of Kristen English Clark, 24, of Gray Court, Jonathan Chad Ritchie, 24, of Fountain Inn and Selina Haven Sterling, 24, of Easley. All four face drug-related charges and remained in custody at the Johnson Detention Center Tuesday afternoon.

According to a release from the LCSO, Ford was arrested on outstanding warrants for grand larceny of a motor vehicle and criminal conspiracy and allegedly found in possession of the stolen F-150 pickup, which had been taken from a Gray Court residence on April 18. Ford also allegedly was in possession of approximately one gram of methamphetamine when arrested. The report states Ford, who the LCSO said is yet to be sentenced on auto-theft and other charges from 2017, also attempted to steal another vehicle from a residence on Durbin Road in Fountain Inn on April 14, but was scared away by the homeowner.

During the investigation, LCSO investigators obtained a warrant for a residence on Nash Street in Fountain Inn, where they discovered about 62 grams of meth, 10 firearms and more than $6,000 in cash upon executing the search warrant.

“Hopefully these criminals will serve a significant prison sentence this time,” said Laurens County Sheriff Don Reynolds. “If they end up back on the streets there is no doubt we’ll be dealing with them again. As you can see with Mr. Ford, within a year of his release we are putting him back in jail for committing the same types of crimes. This is frustrating to law enforcement and it’s even more frustrating to honest, hardworking, and law abiding citizens who have their property stolen by repeat offenders.

“I would like to commend the investigators who worked on this. They worked tirelessly to put these people behind bars where they belong. Not only did they get the thieves, they also got a drug pusher off the streets. That’s one less drug pusher in Laurens County who can poison our communities with meth and other illegal narcotics. This case is a prime example of how drugs and theft go hand in hand and this type of criminal activity will not be tolerated in Laurens County.”