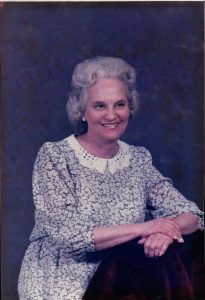 She was born in Laurens, S.C., and was the daughter of the late Claude Edward and Ruth Bradford Simmons.

She was a member of Friendship Presbyterian Church.

Nan made her home with Mike and Von for 25 years. She helped raise her two grandchildren, Bryan and April. However, due to health reasons she spent the last 12 years at NHC, Laurens station 3. Nevertheless, her greatest attribute was her faith in God in all circumstances. The family would like to thank her caregivers on station 3 who were family to her.

In addition to her husband and parents, she is predeceased by her daughter, Susan Marie Graydon; her brothers, Harold, Ed, Brad, and Bob Simmons; and her great-grandchild Will Hamby.

A Graveside service will be held, Friday, April 27, 2018 at 11 a.m. at Forest Lawn Cemetery in Laurens. A Memorial service will follow at Friendship Presbyterian Church in Hickory Tavern at 2 p.m. The family will receive friends immediately following the service at the church.