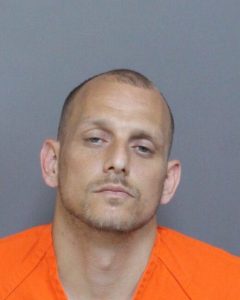 Opening statements were made today (Monday) as a second trial in a nearly 15-year-old murder case got under way at the Laurens County Judicial Complex at Hillcrest. Arthur “A.J.” Bowers is accused of murdering James Bolt, who was working in the Laurens VFW, on Sept. 26, 2003. Bolt, 76, was beaten to death.

Monday morning began with pre-trial motions. Defense attorney Jay G. Anderson of Murrells Inlet filed motions for dismissal and for a change of venue. Both motions were denied by 8th Circuit Cour Judge Donald B. Hocker, and the trial began with opening statements and the first two witnesses for the prosecution before Hocker called a recess just after 4:30 p.m. The trial is to resume at 10 a.m. Tuesday.

In his motion to dismiss and during his opening argument, Anderson portrayed Bowers, who was 17 at the time of the murder and now 32, as an “outsider” who was arrested for the murder in 2003 and spent 23 months in jail before the charges were eventually dropped in 2006.

Anderson described Bowers as a high-school dropout whose former public-school system in Florida had found him “severely emotionally impaired.” Anderson said the defense believes Bowers was coerced into giving three separate statements to the Laurens Police Department that are to be used against him during the trial.

“They didn’t bring this to trial in 2004, 2005 or even 2006. Why?” Anderson asked the newly seated jury rhetorically during his opening argument. “Because these statements are intensely inconsistent. (Bowers) was 17 years old, and he was alone without (legal) representation. He did not fully understand what was being told to him.”

Bowers was arrested again in 2015. According to Anderson, his client was living with his extended family and working at a café in Murrells Inlet, near Myrtle Beach in Georgetown County when he was taken into custody and charged with murder for the second time.

A culmination of events surrounding the then cold case, which also led to the conviction of Brenda Roberts on a charge of accessory to murder after the fact last year, also led to Bowers arrest in 2015. The murder trial began approximately one year after Roberts, then 69, was convicted of accessory to murder after the fact for washing the bloody clothes allegedly worn by Bowers and others suspected of being involved in the murder. She received a 14-year prison term for her involvement in the cover up.

During pre-trial testimony, both former Laurens Police Investigators Walter Bentley, who is now an investigator with the 8th Circuit Solicitor’s Office, and Tony Lynch, now retired, testified that Bowers understood what was being asked of him when he waived his Miranda rights to counsel and offered statements to them. Bentley and Lynch also said they both followed procedures that were proper and lawful during that era when taking statements from Bowers.

Bentley testified that after giving his first statement to police, Bowers seemingly attempted to minimize his involvement in the crime in subsequent statements given to Lynch.

“There was no justification for this,” 8th Circuit Deputy Solicitor Warren Mowry said during opening arguments. “There was no excuse; this was murder with malice and forethought.”

Mowry also told jurors that the evidence to be presented by the prosecution will be strong enough for a conviction, despite the nearly 15 years that have elapsed since the murder.

“The passage of time is never kind to the prosecution of any case,” Mowry said. “It has not been kind to this case, but evidence remains that will convince you (the jurors) beyond the shadow of a doubt that Arthur “A.J.” Bowers and others were at the VFW when James Bolt was killed. They beat him to death and left him dead in a pool of blood.”