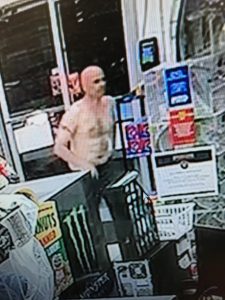 This man is being sought by the LCSO in connection with several auto thefts in the area.

The Laurens County Sheriff’s Office is asking for help in apprehending a man suspected of multiple car thefts in Laurens County over the past two days.

On April 19, 2018 Clinton Public Safety was dispatched to a gas station on Musgrove Street in Clinton in reference to a shirtless male attempting to steal gas from someone at the gas station. He apparently left the scene walking, leaving behind a vehicle which was determined to be stolen out of Spartanburg County. The shirtless male then stole a Kia Sorento from a residence on Musgrove Street.

A Clinton Public Safety Officer immediately pursued the vehicle which went down Hwy 56 South and got on the interstate. The Laurens County Sheriff’s Office entered the pursuit in Gray Court after the driver of the vehicle exited the interstate. The pursuit lasted approximately 25 minutes but was eventually terminated. At some point after the vehicle pursuit the suspect stopped at Brothers Fast Stop in Laurens. He entered the store, threw change on the counter for gas and immediately left.

The stolen Kia Sorento was located and recovered this morning (April 20) on Sandy Drive in Honea Path, Laurens County at approximately 7:30. A short time later someone stole a 2000 model Chrysler Town & Country van from 13001 Hwy 25 in Honea Path in Laurens County. The same suspect is believed to be responsible for this vehicle theft. The van is described as black with a green hood. Anderson County Deputies located the vehicle and pursued it, however the pursuit was called off before the suspect could be apprehended.

Video of the suspect was obtained from Brothers Fast Stop in Laurens. If anyone recognizes this individual they are asked to call the Laurens County Sheriff’s Office at 864-984-4967. Information can also be anonymously reported through Crime Stoppers by calling 68-CRIME.