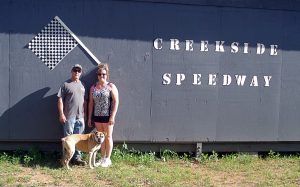 That’s exactly what is set to take place Sunday, April 29 at the new Creekside Speedway on S.C. Highway 101 in Gray Court. The eighth-mile oval will host lawnmower racing each week, a first for Laurens County and possibly the state.

“We want everyone to come out and participate,” said Creekside owner Scott Campbell, who is opening the track with girlfriend Luwana Burnett.

The green flag on the inaugural race day is scheduled to drop at 2 p.m., and racing will be done by 5 p.m. The track will host five divisions – Kids, Women, Stock, Super Stock and Modified – each Sunday with the season set to run into October.

“It’s a lot cheaper than building a racecar,” said Burnett, who along with Campbell, is part of the local auto-racing community. Son-in-law Michael Smith is a regular competitor at Laurens County Speedway.

Campbell said lawnmower racers could get into the sport for $200 or less. Mowers require some modifications for safety, but can be put on the track pretty much as is in the stock division.

As is the case in other forms of racing, the price of speed goes up at every level, so Super Modified mowers will be more expensive, but will go faster.

Racers will be required to wear a helmet and long pants. Mowers must have kill switches to cut the engine in case of an accident, and, of course, the blades must be taken off.

“Most everybody now buys zero-turn lawnmowers, so there are a lot of (more traditional riding) lawnmowers sitting in yards or going to the dump, so this is a chance to do something with them,” Campbell said.

Campbell and Burnett emphasized that the Sunday lawnmower races will be family-focused events. Outside the track, there is a playground for children as well as a concession stand. Participants and spectators are also welcome to picnic.

So far, Creekside Speedway has more than 150 followers on Facebook and quite a few people have stopped on Highway 101 to find out what type of racing the new track would be hosting.

Some were surprised to find out that lawnmowers would be featured there.

So, Creekside could host the first mower races in the state.

“Some folks with churches stopped by and said they’d done it for fun, and they were excited that we’re going to be doing it fulltime,” Burnett said.

Opening Day had been planned for late March, but Laurens County ordinances, which were aimed at go-karts, had to be adjusted to include mowers.

With that out of the way, Creekside will be open for business on April 29.

Campbell and Burnett have watched lawn mower racing on YouTube, but the first time they will see a live event will be the first one they host at Creekside.