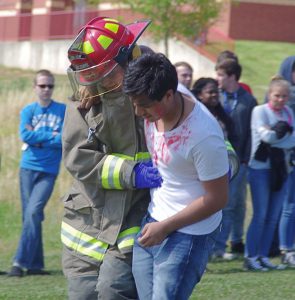 Clinton High School administrators and Clinton Public Safety leaders teamed up to bring a nightmare to life on the school’s campus Wednesday morning.

Students played the roles of victims and rescuers in a mock car crash caused by drunk driving as the school prepares for this weekend’s prom.

“I’m glad I got to do it,” said CHS student Alyssa Shiflet. “It’s good to show people at the school that you shouldn’t drink and drive because we do have prom this weekend.”

Clinton Public Safety brought in two wrecked vehicles and CHS students played the roles of victims of a DUI-related crash, complete with fake wounds and fake blood drenching their clothes.

Students involved in the school’s firefighting courses also suited up to provide aid to the victims, some using the Jaws of Life to extricate some of them from a vehicle.

Shane Burns and Cameron Dorsey said it was good to put the training they have been receiving to work.

“We wanted to come out and rely on our training,” Dorsey said. “We got everybody bandaged up, and we saved lives. . . . That’s what it’s all about, saving lives. That’s what we were here to do.”

Both Burns and Dorsey said members of their families either are or have been firefighters, and it’s a legacy they want to continue. 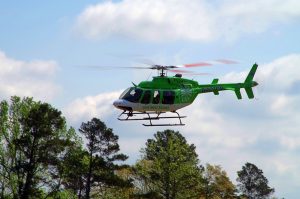 “Both my dad and my sister are involved,” said Burns, wearing a t-shirt from the Joanna Volunteer Fire Department. “So, I grew up around it.”

Both said they like helping people, which is why they are training now to become firefighters.

Shiflet was “evacuated” by helicopter from the staged wreck and took a short flight around the school’s athletic fields as members of the student body and her father, Clinton Public Safety Fire Chief Scott Shiflet looked on.

“What we’re hoping to do is make (students) aware of just how bad it can be if they do something like this,” Chief Shiflet said. “It’s not just drunk driving; it’s texting and driving, it’s any type of distracted driving.

“If we can avoid just one death, that’s what we’re looking for.”

Shiflet said he has seen real traffic fatalities caused by drunk and distracted drivers as an emergency responder and has an especially vested interest with daughter Alyssa.

“It probably doesn’t reach all of them, but I think it does have an impact on a good many,” Chief Shiflet said of the mock crash. “We’ve had several come up and talk to us at these in the past, and we’ve had family members (of real crashes) involved in that, so it really hits home with them. “