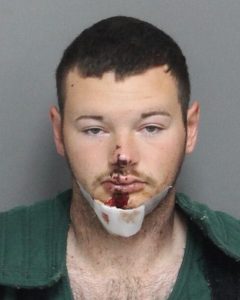 A Laurens man is in jail facing multiple charges after a domestic-violence incident Monday in Hickory Tavern led to his arrest.

Colton David Hurley, 20, was booked into the Johnson Detention Center Wednesday on charges stemming from the incident, including kidnapping, attempted murder, burglary, two counts of pointing a firearm, unlawful neglect of a child, possession of a weapon during a violent crime, breach of peace of a high and aggravated nature and ill treatment of animals.

According to the Laurens County Sheriff’s Office, Hurley arrived at a residence on Stiles Lane in Hickory Tavern where he allegedly rammed the victim’s vehicle with his truck multiple times. When the victim attempted to flee on foot, the LCSO report said he tackled and assaulted her. A relative of the victim arrived, and the victim was able to escape into her residence.

The report said Hurley then went into another residence and gained possession of a .20-gauge shotgun. He returned and used the shotgun to shoot kill at pointblank range, killing the animal and apparently firing several other shots.

Hurley then allegedly forced entry into the home with the firearm and held the victim against her will for a short time as she held her small child. The report said he then forced his way into a locked room, took control of the victim and forced her outside.

He then shot himself in the face, but suffered minor injuries due to the placement of the weapon, according to the report. Hurley was still conscious and mobile when LCSO deputies arrived on the scene. He surrendered without incident and was transported to a local hospital where he was treated for his wounds. Hurley was booked into the detention center Wednesday.

The LCSO said response time after the 9-1-1 call was received took seven minutes. Several units, including a School Resource Officer from Hickory Tavern School responded. An approaching school bus was diverted to a safe location by the SRO during the incident.

“The Laurens County Sheriff’s Office is continuing my commitment to battle domestic violence in our Communities and will strive to assist domestic violence victims escape these types of volatile relationships,” Laurens County Sheriff Don Reynolds said. “Hurley’s actions during this incident caused the victim to fear for her life and unnecessarily caused the death of an animal. Domestic violence and the inhumane and ill treatment of animals will not be tolerated. We will continue to aggressively pursue prosecution of anyone who commits these types of crimes.”