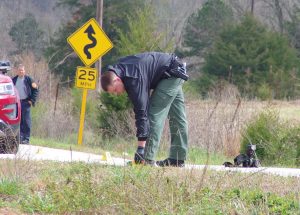 An investigator with the Greenville County Sheriff’s Office searches for evidence after a woman was stabbed near the Laurens-Greenville county line Tuesday morning. (Photo by John Clayton)

A woman was stabbed and reportedly dumped from a moving vehicle on McCarter Road just across the Laurens County line in Greenville County Tuesday morning.

“We initially responded to it, but it ended up happening just inside Greenville County, so we turned everything over to them,” said LCSO Chief Deputy Jarvis Reeder.

According to the Greenville County Sheriff’s Office, the victim, an adult female, suffered from at least one stab wound and was transported to the hospital.

No other information was available on the victim or her assailant. Reeder said he believed the victim to be in stable condition when she was transported to the hospital.