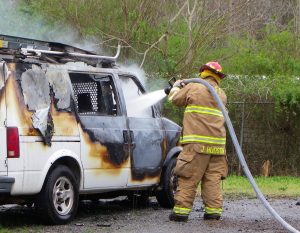 A van belonging to a local business was discovered in flames Monday afternoon by Laurens Police officers, who are now investigating the incident as a suspicious fire and a theft.

The Laurens Fire Department responded and extinguished the fire, but the van was destroyed. The fire also damaged a truck parked nearby, melting sections of the side molding and other areas.

“We’re thankful for the vigilance of Officer Gallo,” said LPD Major Chrissie Cofield. “There was (a person) inside the building, and if the truck had exploded, it could have been much worse.”

The building was evacuated prior to the arrival of the fire department.

Cofield said a propane tank was also located near the van and the building, and an explosion could have been disastrous.

After the fire was extinguished, police discovered tools were missing from the van and are now investigating that as a theft.

The incident remains under investigation by the Laurens police and fire departments, Cofield said.