Waterloo, SC – Highway 221 commuters on the Lake Greenwood side of Wat 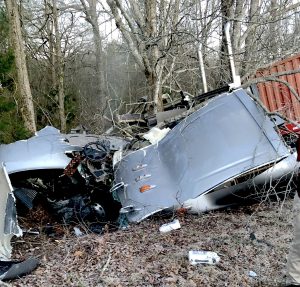 erloo came together as a community early Wednesday morning when a semi truck heading toward Greenwood veered off the side of the highway into a ravine, splintering the truck cab and, surprisingly to all who saw the accident, left the driver, Bill Humphries of Mountville, with only minor scrapes.

But not only were his lack of life-threatening injuries remarkable, said Jim Firmin, one of the first on the scene, but also the way a large group of strangers came together to help.

Firmin was traveling toward Waterloo from Greenwood when he saw the truck coming. After the semi passed by Firmin looked in his rear view mirror and saw the truck leaving the road.

“I saw him going down, and then I saw a big cloud of smoke,” Firmin said. He pulled over immediately and started calling 911 at 7:33 a.m. as he left his car. He then headed to the tree-filled ravine and let a woman who was already there finish the conversation with dispatch.

“Then, out of the blue, there’s another person walking up to the truck at the same time,” Firmin said. “I call him the mystery man, because everything happened so fast I never got his name, but he was the one who had a tool and cut the seatbelt, and we helped lower (Humphries) down, and we were trying to help him calm down.”

The young man, wearing a Ninety Six High School t-shirt, had a pack with a first aid kit, used gauze to clean Humphries wounds, and other bystanders helped bring the man up the hill to wait on an ambulance. Firmin and Smith started working to direct traffic until troopers from the S.C. Highway Patrol eventually took over.

“My only regret was that everything was happening so fast, and when I tried to find the young man and thank him he was already gone,” Firmin said. He also realized that the timing for all the right people to be there at once was crucial.

“Usually on Wednesday mornings I stay in Greenwood for a Bible study, and I didn’t do that and that gives me chills,” Firmin said.

Firmin said he understood why so many people were commenting about the miracle of the driver’s wellbeing based on the shattered state of his truck. The truck wasn’t finally removed until about 2:30 that afternoon, so there were plenty of people passing the wreckage and assuming the worst.

That night after Dr. Scott Rogers of Laurens Dentistry posted his pictures, including one of Humphries bleeding slightly but standing, “Miracle” and “God’s protection” were typical comments under the photos. Rogers took them while he stood talking with the driver who finally was able to stand and look at what was left of his semi.

Like Firmin, Rogers had been on his way to work when he stopped within seconds of the accident, seeing the truck and expecting the worst.

“I’m not sure what I would have done if we were dealing with what we all anticipated,” Rogers said Wednesday evening. “I honestly expected to find him severely injured, disfigured and dead.”

The fact that the Humphries had suffered only minimal injuries was proof of “an awesome, loving God,” Rogers said. “And I’m still a little shaken and in disbelief that he was standing there talking to me.”

Rogers hoped to get in touch with the driver, who admitted to the dentist his two biggest concerns at the time were finding his phone to call his wife and finding his dentures, which were both lost somewhere in the wreckage.

“I didn’t really help that much, and I think my purpose was just to be there and be in a position where I can help him with his mouth when he’s ready to go forward, because I’d love to help replace his dentures at no cost,” Rogers said.

Rogers said what could have been a tragic event became inspiring, the way strangers jumped into action and came together to help in any way they could.

Firmin agreed that it was an incredible group effort.

“It wasn’t just me and it wasn’t just the young man, though he had all the right tools and really was a hero,” Firmin said. “It was everybody there helping and working together and looking back on it, it was really pretty neat.”

As for Humphries, on Friday he said he has been working to try and contact as many people as he can find to thank them for the assistance Wednesday morning and he learned that Chris Smith w 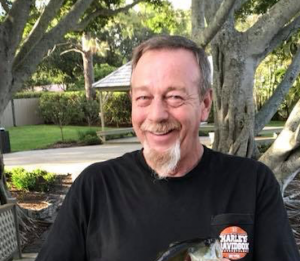 as the person who cut the seatbelt.

Humphries said it was ironic because he’s never had an accident in 32 years as a truck driver, he has helped many motorists and he recently assisted a trucker who received life-threatening injuries in an accident on I-26, and this time he was on the receiving end.

He explained a sip of coffee went down the wrong way and he was choking almost to the point of passing out, slowing down and looking for a place to pull off.

“I try to help people and my mother always said what goes around comes around and I guess she’s right,” Humphries said. “I’m thankful to be alive and I’m thankful for everyone who helped me.”

This story was published in this weekend’s issue of the Laurens County Advertiser EXTRA. Updated Friday, March 16, 7:20 p.m. Look for an update in the Wednesday, March 21 issue of The Advertiser.