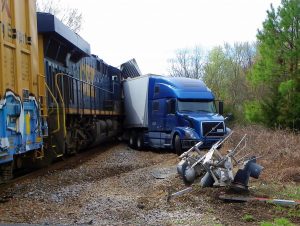 A CSX train collided with a semi as the truck attempted to cross railroad tracks Monday morning at Highway 221 and Highway 92 near Ora.

A CSX train collided with an 18-wheeler as the driver of the truck attempted to cross the railroad tracks at S.C. 92 and Highway 221 late Monday morning.

The driver of the truck was apparently traveling Southbound on Highway 221 when he attempted to make the right turn, crossing the railroad tracks at Highway 92. The driver told a S.C. State Trooper at the scene that he got stuck after the cab cleared the tracks.

The train struck the front of the trailer, knocking it just past the intersection before coming to a stop.

No injuries were reported by the driver of the truck or the crew operating the train.

For the complete story, read Wednesday’s edition of The Laurens County Advertiser.